In factory automation, humans and robots comprise the two major work forces. Traditionally, humans and robots have not physically collaborated with each other during operation, in significant part because full automation with robots was the goal. In recent years, however, it has been recognized that there are tremendous advantages if robots are brought out of their cages and to allow them to share work space with and to collaborate with humans to take advantage of the best of two worlds – on one hand, the reliable execution of tasks by robots without wear handling objects of a wide range of sizes and weights, and on the other hand, the intelligence of humans and their five senses-based adaptability and flexibility. For collaboration between humans and robots to be successful, it is a prerequisite to ensure the safety of the humans in such collaboration. At the same time, it is important to ensure that robots collaborate with humans to ensure the best performance possible. The goal of this project is to establish a set of design principles of safe and efficient robot collaboration systems (SERoCS) for the next generation co-robots, which consists of robust cognition algorithms for environment monitoring, optimal task planning algorithms for safe human-robot collaboration, and safe motion planning and control algorithms for safe human-robot interactions (HRI). The proposed SERoCS will significantly expand the skill sets of the co-robots and prevent or minimize occurrences of human-robot collision and robot-robot collision during operation. There are three main modules in the SERoCS system.

We also want to evaluate the overall performance of our system and provide some guidance for module and system design principles, therefore we have: 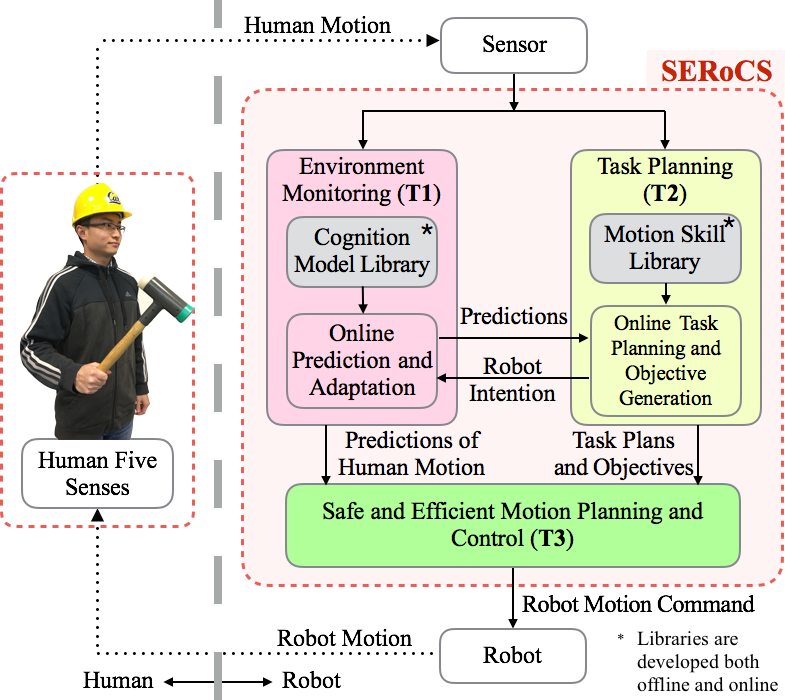 Please send an email to Professor Masayoshi Tomizuka (tomizuka@berkeley.edu) and Jessica Leu (jess.leu24@berkeley.edu) if you are interested in our Research Topics in Human-Robot Interaction and joining our group.

Please make sure that the following aspects are well covered in your application email.